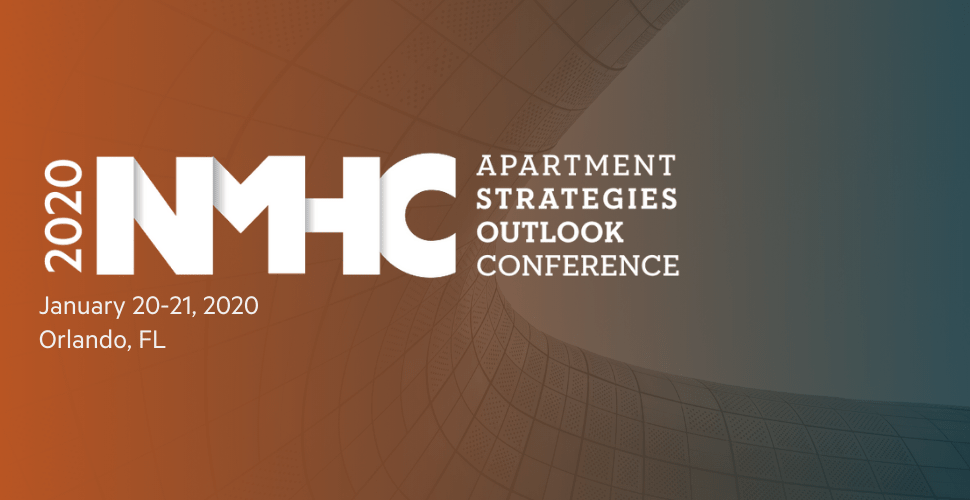 The Gray Capital team is in (chilly) Orlando this week for the annual National Multifamily Housing Council meeting and conferences.

The NMHC annual meeting is the biggest industry event in the multifamily world bringing the nations largest owners, lenders, brokers and service providers all together in one place to network, share economic forecasts, learn, and do deals. You can check out the meetings home page and the agenda by following the links.

The event will take place January 21-23 with the NMHCs Women’s Event taking place on the 20th and the Strategies and Outlook conference also getting started on the 20th.

We will update this page periodically throughout the week with highlights, industry information, and general content about the biggest event in multifamily.

We will be updating this page as the sessions progress.

We are in full swing with the Apartment Strategies and Outlook conference portion of NMHC getting underway this morning. After the morning reception one of the more anticipated presentations began, the 2020 Economic Outlook and Market Implications presented by Mark D. Gibson – CEO, Capital Markets from JLL.

Below are some highlights and summary from the talk that was filled with new data that paints the future of multifamily as being on very solid ground:

Even with public REITs delivering outsized returns as of recent, more institutions, pension funds specifically, are moving away from public REITs and into private investment vehicles in order to avoid the volatility that is notorious with publicly traded securities. This mirrors individual and family office sentiment that the volatility and potential manipulation of the public markets is not made up for in returns. More investors are turning to private investments vehicles such as private REITs, RE funds, and private JVs or syndications.

Multifamily has outperformed all other CRE asset classes on a total return basis.

This was surprising: Dallas (DFW) had more sales volume and liquidity that New York or LA.

Institutional giant Blackstone was the #1 buyer and #2 seller nationwide in 2019. The largest funds continue to take the lion share of the $200b in dry powder sitting on the sideline waiting to be deployed.

While the market may seem to be white hot or over heating, when looking back at the long term average of absorption being under 1.2% of supply, we are still below those levels. When looking at the spread between the 10YR treasury and cap rates we are still 50-70bps above the long term mean – indicating that cap rates have more room to compress. For those worrying about over leveraging the average loan to value in 2019 was 19% less than in 2007.

The Rise of Home Sharing in Multifamily Assets

Short term rentals and co-living continue to be hot topics of interest and speculation throughout the multifamily industry but there seem to still be more questions than answers. The reality is that while there are a few select operators experimenting with these strategies, most operators question whether the headache is worth the ROI if there is any at all.

One question posed was the concern from residents in properties that have a % of units dedicated to STR (short term rental, think AirBnB) was whether the rent paid by year long residents would eventually increase. There is also the concern of the disruption that STRs can have on year round residents. A family may not want to rent an apartment in a community that is somewhat transient.

The conversation then moved to the idea that it may be very common in the future for some kind of mix of long term, short term and even co-living options may all be incorporated together in one asset – but it has to be planned out thoroughly. Just like when mixed use properties that combined multifamily above and retail on the ground level were new there are some logistics to plan for. If the execution is haphazard then residents are more likely to complain when eventually kinks in the system are uncovered. On the other hand if the execution is seamless then the true upside potential has a higher likelihood of being realized.

Tax and local regulations can become obstacles to be aware of and they must be addressed before any kind of STR strategy is implemented. Hotel income can be taxed at a much higher rate (sometimes 2x more) that traditional apartments. Zoning issues can also be a problem. If your local municipality all of a sudden classifies you as a hotel and the land is not zoned for hospitality then you may run into a serious issue.

Ones exit also must be considered when including these new strategies. If you are moving to sell, what will a prospective buyer think if you have a large % of STRs and how do they include that in their underwriting. If your NOI is inflated due to STRs but the new buyer has no interest in continuing to operate those units on a short term basis there may be a wide spread between the bid and ask price. Also how will ones lender view STR income? Luckily most lenders seem to be flexible and open to the concept if STRs are under 20% of the total unit makeup.

Lastly ,the discussion turned to the need for the industry to get ahead of the narrative about STRs and co-living before municipalities foresee issues that may or may not be legitimate and begin to over regulate.

We’ve been calling the market top since 2015… and here we are.

Investor appetite for multifamily assets is extraordinary. As discussed in the past, investors are shying away from public markets and are seeking hard assets to preserve their capital. With bonds yielding miserably low returns real estate is a highly attractive alternative. There is also the influx of foreign capital now being much more comfortable, and at time even just aware, of multifamily as a solid asset class.

The consensus that value add deals, while highly successful the past several years, is falling out of favor. Value add projects continue to be bid up to a point where the premium on the value add risk makes sense than it did even a year ago. More investors have been shifting to Core Plus assets and away from value add. It was even said that value add is the weakest portion of the industry today.

If there’s only a 200bps difference between an ugly property and a pretty one and they’re right next to each other – I’ll buy the prettier, higher quality property

The discussion continued with how strong the underlying fundamentals of multifamily truly are. Absorption has been far outpacing new supply and affordability is not as big of an issue as some may believe across the broader market. In general the market is very balanced as it stands today.

Investor preference from IRR and long term gains has lost favor to yield and cash flow. As baby boomers retire by the droves and others pursue FIRE (financial independence retire early) investment plans that throw off good cash flow from inception is the preference of most investors today, according to the panel.

Development risk at this point in the cycle was also highlighted. While there may not be a recession in the next few months, in the three years it takes to complete a ground up development project the chance is more likely.

The last topic covered related to raising capital. It still remains a prospect of old fashioned courtship and as one panelist put it “there is no swipe right” referring to tinder like matching. While that being said there was no discussion of crowdfunding.

This panel focused on the potential risks facing the macro economic picture at large and how it could effect the multifamily industry. Many of the risks appear today to be somewhat mitigated however they certainly still pose concerns for the overall economy.

But is it different this time? Unlike past inversions that persisted over an extended period of time, the 2’s minus 10’s inversion in late 2019 only occurred over a two day period between August 27th – 29th. On the other hand the 3 month treasury bond minus the 10 year inverted between March and October of 2019.

The panel concluded that since the curve is no longer inverted that the major upside risk may be mitigated as more economic data has come in putting the US economy on solid footing. Again, is it really different this time? Only time will tell.

Trade War – The trade war between the United States and China has been waging now for several year with both countries placing tariffs on foreign goods imported from each others countries. In addition to higher prices for some good, the biggest threat came from the cloud of uncertainty and unpredictability.

The panel concluded since there is a Phase 1 deal that covers a fraction of the disputed issues at hand much of the uncertainty may be behind us. I am, however, very skeptical that we’ve seen the end to what is essentially a new economic cold war and struggle for control of the global economic and political system.

The “Japanization” of the US Economy – Is a Japan like economy the future for the US? With features of declining birth rates, slow economic growth, an aging population and negative interest rates the US could share some of those characteristics in the future, but what does that mean for multifamily? With population growth and employment growth being the two largest contributing factors to the multifamily investment thesis, a slowdown in population growth would certainly not fair well for the the multifamily industry. Without continued net immigration into the US we may see declining populations. The US still has a positive population growth rate, although the rate of growth is slowing.

Rent Control – Politics and public policy don’t always incorporate economic reality and nothing could be more exemplifying than the push for more rent control in states and cities across the US. While the new legislation in Oregon, California isn’t as radical as the new policy in New York City, none of the new policy changes that place caps on rental increases are based on sound economic theory, in fact quite the opposite. The fear is that these new laws are only a canary in a coal mine.